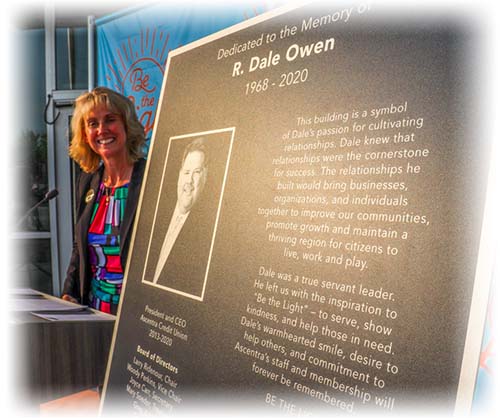 BETTENDORF, IOWA – On the evening of Monday, July 19, 2021 colleagues, family and friends gathered on the plaza of Ascentra Credit Union’s Home Office to dedicate the building in honor of their late President and CEO, Dale Owen and to celebrate his legacy.

The building, located at 2019 Grant Street in Bettendorf, was dedicated to Owen in the same fashion that Ascentra’s East 53rd Street branch was dedicated to his predecessor, Paul Lensmeyer who passed in 2013.  An unveiling of a bronze plaque that will be permanently attached to the outside of the building showing a photo of Dale with an inscription that reads, “This building is a symbol of Dale’s passion for cultivating relationships. Dale knew that relationships were the cornerstone for success. The relationships he built would bring business, organizations, and individuals together to improve our communities, promote growth and maintain a thriving region for citizens to live, work and play. Dale was a true servant leader. He left us with the inspiration to “Be the Light” – to serve, show kindness, and help those in need. Dale’s warmhearted smile, desire to help others, and commitment to Ascentra’s staff and membership will forever be remembered – Be the Light”.  The building is a reflection of Dale’s vision for a thriving downtown, a workspace that meets the needs of Ascentra’s members, is collaborative and inviting for staff and is pleasing to the eye for those who pass by the office each day.

In addition, and as part of the dedication, Ascentra Credit Union and the Ascentra Credit Union Foundation made sizable contributions to several local charities that were near and dear to Dale’s heart.  A $25,000 check from the Ascentra Credit Union Foundation was presented to Monta Ponsetto, the Executive Director of the Rock Island-Milan Education Foundation. The amount is a combination of a donation from the foundation combined with the memorial gifts given to the foundation in Dale’s name at the time of his passing. “It is our pleasure to present this endowment to establish the Dale Owen “Be the Light” scholarship, which on an annual basis will provide a Rock Island High School Senior with $1,000 towards higher education”, explained Andry. Dale was a proud “Rocky” graduate, class of 1986.

Another $25,000 donation was given by Ascentra Credit Union and presented to Dan McNeil, Executive Director of the Spring Forward Learning Center in Rock Island. As an advocate of life-long learning, Dale recognized that early education programs are very important in youth development. Every year he would direct some or all of his leadership grant funds to Spring Forward, which serves students from kindergarten through sixth grade and provides after school and summer programming to improve literacy and curb summer learning loss.

In addition, five other $5,000 donations were made to local charities that were also important to Dale, for a total of $75,000 in donations made.

Following the dedication and unveiling ceremony, guests were invited to join in a celebration that included music from a playlist of Dale’s favorite music and his favorite drinks and foods.  Wood-fired pizza was provided by Streets of Italy and ice cream by Here’s the Scoop Ice Cream Shop, both of Davenport, Iowa.

“It was a night of celebration and remembering a dear mentor and friend”, said Jennifer Naeve, Senior Vice President and Chief Marketing Officer, Ascentra Credit Union. “I know Dale would have been humbled by the turnout and the kind words that were expressed about him. He made an imprint on everyone he met and his legacy will live on as we continue to be the light for others.”