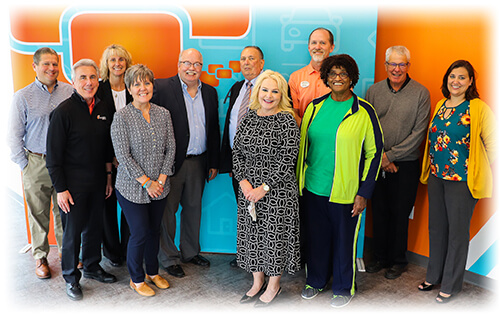 DAVENPORT, IOWA –The Hilltop Campus Village (HCV), a historic commercial district in Central Davenport was gifted the building they currently use as their headquarters by Ascentra Credit Union during Ascentra’s annual meeting on April 20, 2021 in Bettendorf.

“This was another final wish of our beloved, late President and CEO, Dale Owen,” said Linda Andry, President and CEO, Ascentra Credit Union. “Dale was involved in the early stages of the Hilltop Campus Village and held its mission near and dear to his heart. I know he would be happy knowing that this building was donated to their cause.”

The building at 122 East 15th Street in Davenport once housed Ascentra’s Central Davenport branch before a new branch was built on the corner of Brady and Locust in August 2015. Since then, the HCV has been using the building as its headquarters. “We actually moved in six months before Ascentra’s staff moved into their new building,” said Scott Tunnicliff, Executive Director, Hilltop Campus Village.

The HCV is a nonprofit organization developed through the Iowa Economic Development Authority’s Main Street Iowa Program that is working with the City of Davenport community and other organizations to preserve, restore, redevelop and revitalize the unique identity, assets and character of the central Davenport historic commercial district. Through interactive partnerships and the help of committed volunteers, the HCV district is attracting and retaining a diverse population, making it more financially stable and sustainable and helping businesses and organizations create employment opportunities. The HCV is a certified 501c3 not-for-profit organization.

Whether it was through the building, Scott’s relationship with past Ascentra CEOs, Paul Lensmeyer and Dale Owen, or through board member Bob Lee who holds positions on the boards of both organizations, Ascentra Credit Union has been a part of this important program since its inception.

“This is an exciting development for both our organizations,” said Bob Lee, who serves as the HCV President. “It helps cement the ties between both institutions and contributes to the long-term sustainability of the district.”

Before the donation, the HCV was in the middle of a feasibility study to buy, renovate and convert a building. This donation eliminated the first phase of that study allowing capital to be freed up for the second stage that includes renovating the facility to turn it into a small business incubator and conference area that will house the board, host webinars and be used as a remote location for the Small Business Administration and their development center.

This will also allow the HCV to offer courses, counseling, and assistance to groups through webinars provided by Main Street Iowa to help entrepreneurs and existing businesses sustain during the post pandemic recovery period.

“The plans the Board and our volunteers on the HCV have for this property will help small businesses, other not-for-profits and residents seeking to start businesses of their own,” said Tunnicliff. “It will become a performing asset and amenity within our district, and we thank Ascentra for their generosity.”

Late President and CEO, Dale Owen began serving on the HCV board of directors shortly after it was created where he developed a passion for this organization. Since then a member of Ascentra’s staff has held a position on the HCV’s board and continues to today.

“Ascentra believes in listening, caring, doing what’s right,” said Andry. “Supporting the communities we serve is a big part of what we do and partnering with the HCV to revitalize Central Davenport is a perfect fit for our two organizations”.
Back to all News